I’ve long been a fan of short stories and penned my first attempt at the genre when I was only ten. I continued writing short fiction during high school and college, though none of the stories managed to survive the years. I can’t remember when I wrote my first short story featuring French Quarter sleuth Wyatt Thomas, but it was long before the publication of Big Easy in 2006. Once I started, I found it all but impossible to stop.
~SPOILER ALERT~
When I decided to write Big Easy, my first novel-length French Quarter Mystery, I did so by combining parts of three New Orleans’ short stories: Cities of the Dead, Voodoo Nights, and Pontchartrain. If you haven’t read Big Easy and are considering doing so, then you should probably start it first before reading Cities of the Dead.
If you’ve already read Big Easy, then you might get a kick out of Cities of the Dead as it’s different in many ways than the side-story in the novel.

Cities of the Dead 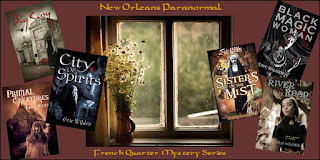 Born near Black Bayou in the little Louisiana town of Vivian, Eric Wilder grew up listening to his grandmother’s tales of politics, corruption, and ghosts that haunt the night. He now lives in Oklahoma where he continues to pen mysteries and short stories with a southern accent. He is the author of the French Quarter Mystery Series set in New Orleans and the Paranormal Cowboy Series. Please check it out on his Amazon, Barnes & Noble, Kobo and iBook author pages. You might also like to check out his website.
Posted by Eric Wilder at 9:47 AM No comments: