A character in Eric Wilder’s French Quarter Mystery Series, Mama Mulate is the business partner of sleuth Wyatt Thomas. New Orleans’ favorite voodoo mambo can cook as well as she casts spells and mixes secret potions. Here are twenty-two of her favorite Creole recipes, along with the bonus short story Conjure Man.

Eric'sWeb
Posted by Eric Wilder at 10:31 PM No comments:

I changed my
i Pod name to Titanic. It's syncing now.

When chemists die, they barium.

Jokes about German sausage are the wurst.

A soldier who survived mustard gas and pepper spray is now a seasoned veteran.

I know a guy who's addicted to brake fluid . He says he can stop any time.

How does Moses make his tea? Hebrews it.

I stayed up all night to see where the sun went. Then it dawned on me.

This girl said she recognized me from the vegetarian club, but I'd never met
herbivore.

I'm reading a book about anti-gravity. I can't put it down.

I did a theatrical performance about puns. It was a play on words.

They told me I had type A blood, but it was a Type- O.

A dyslexic man walks into a bra.

Why were the Indians here first? They had reservations .

Class trip to the Coca-Cola factory. I hope there's no pop quiz.

I didn't like my beard at first. Then it grew on me.

How do you make holy water? Boil the hell out of it!

Did you hear about the cross eyed teacher who lost her job because she couldn't
control her pupils?

When you get a bladder infection, urine trouble.

What does a clock do when it's hungry? It goes back four seconds.

I wondered why the baseball was getting bigger. Then it hit me!

I tried to catch some fog. I mist.

What do you call a dinosaur with an extensive
vocabulary? A thesaurus.

England has no kidney bank,
but it does have a Liverpool .

I used to be a banker, but then I lost interest.

I dropped out of communism class because of lousy Marx.

All the toilets in New York 's
police stations have been stolen. Police have nothing to go on.

I got a job at a bakery because I kneaded dough.

Haunted French pancakes give me the crepes.

Velcro - what a rip off!

I used to think I was indecisive, but now I'm not so sure.

Be kind to your dentist. He has fillings, too.

Eric'sWeb
Posted by Eric Wilder at 10:10 AM No comments:

Email ThisBlogThis!Share to TwitterShare to FacebookShare to Pinterest
Labels: play on words, puns

Congrats, Miami. You played your heart out. Sorry my Thunder didn't win but they just got beat by one of the most extraordinary teams in the NBA ever! At least now maybe I can get back to my writing. p.s. I'm proud of you, Thunder, and proud of OKC.

Eric'sWeb
Posted by Eric Wilder at 11:34 PM No comments:

A friend emailed me this list. Hope you enjoy it as much as I did.

<><>
3. The nation's first parking meter was installed in Oklahoma City in 1935.
4. The first Girl Scout Cookie was sold in Muskogee in 1917.
5. Cimarron County, located in the Oklahoma Panhandle, is the only county in the U.S. bordered by 4 separate states ­ Texas, New Mexico, Colorado and Kansas .
6. The Oklahoma State Capital is the only capital in the U.S. with working oil wells on its grounds.
7. Boise City, Okla., was the only city in the United States to be bombed during World War II. On Monday, July 5, 1943, at 12:30am., a B-17 Bomber based at Dalhart Army Air Base, Texas, dropped six practice bombs on the sleeping town, mistaking the city lights as target lights. Incompetent America has been around for a long time.
8. WKY Radio in Oklahoma City was the first radio station transmitting west of the Mississippi River .
9. The nation's first "tornado warning" was issued March 25, 1948 in Oklahoma City minutes before a devastating tornado. Because of the warning, no lives were lost.
10. Oklahoma has the largest Native American population of any state in the U.S.
11. The name ' Oklahoma ' comes from two Choctaw words ­ okla meaning ""people" and humma meaning "red." So the name means, "Red People." The name was approved in 1890.
12. Oklahoma has produced more astronauts than any other state.
13. Oklahoma has more man-made lakes than any other state (including Caddo County's Fort Cobb Lake).
14. During the "Land Rush," Oklahoma City and Guthrie went from vast, open prairie to cities of over 10,000 in a single day.
15. The nation's first "Yield" traffic sign was erected in Tulsa on a trial basis.
16. The Pensacola Dam on Grand Lake is the longest multi-arched dam in the world at 6,565 feet.
17. The Port of Catoosa (just north of Tulsa) is the largest inland port in America .
18. The aerosol can was invented in Bartlesville .
19. Per square mile, Oklahoma has more tornadoes than any other place in the world.
20. The highest wind speed ever recorded on earth was in Moore, Okla., on May 3, 1999 during the Oklahoma City F-5 tornado. The Wind speed, clocked at 318 mph, came within a mile of the Johnson Home on Winding Creek.
21. The Will Rogers World Airport and the Wiley Post Airport are both named after two famous Oklahomans, both killed in the same airplane crash.
22. The first female college west of Mississippi was in Tahlequah

And Oklahoma Towns Offer It All ­

There's A Town Named After A Number:
Forty-One, Oklahoma

And A Town Whose Letters Don't Spell Anything:
IXL, Oklahoma

For The Sportsman Who Wants To Get Away From It All...
Fisherman's Paradise, Oklahoma

We Even Have A City Named After Earth's Only Satellite!
Moon, Oklahoma

And A City Named After Our State!
Oklahoma City, Oklahoma

And Regardless What Side Of The Fence You're On...
Gay , Oklahoma
Straight, Oklahoma
Eric'sWeb
Posted by Eric Wilder at 12:26 AM No comments:

I was lying on my back in the pool, just before dark tonight. Looking up, I spotted a distant object shaped somewhat like a distended drop of oil. It wasn't moving away from me, or getting closer, but it did appear to move slowly up and down. Very slowly. I confess, I didn't have my glasses on so I didn't get a clear view of the object. It could possibly have been a weather balloon. Anyway, it was a UFO to me since it was flying and I couldn't identify it. I drew a picture but I'm not an artist and this is just a feeble attempt to show what it looked like.

Eric'sWeb
Posted by Eric Wilder at 10:19 PM No comments: 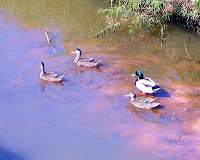 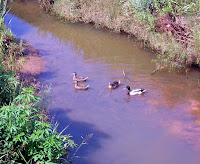 More pics of the migratory birds that return to Edmond every spring. The two offspring are almost grown.
Eric'sWeb
Posted by Eric Wilder at 9:40 PM No comments:

Way to go. Thunder up!

Eric'sWeb
Posted by Eric Wilder at 11:48 PM No comments: 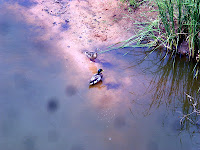 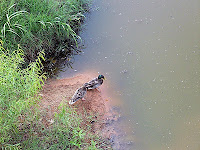 An early morning thunderstorm added to the humidity already rampant in central Oklahoma. As I took my afternoon walk, it made the day’s ninety-degree temperature feel like a hundred. Many creeks dissect hilly Edmond. A pair of wild ducks lives in a small pond formed by one of the creeks. Though Marilyn disagrees, I say they are the same two ducks that have been returning to the neighborhood every year for the past seven years.


The ducks found this pond last year. Now, they have a pair of ducklings they hatched and are raising. A year ago, the pond was tiny, affected like the rest of Oklahoma by persistent drought. No drought in 2012. Tonight, as I took a dip in my pool and played with my pups, I stared up at the full moon, peaking through hazy cloud cover. The humidity makes me happy. I bet my two favorite ducks also love it, and despite what Marilyn thinks, I’ll see them at the pond again next year.

Eric'sWeb
Posted by Eric Wilder at 12:10 AM No comments: