I published my first novel, Ghost of a Chance in 2005. The protagonist, Buck McDivit, is an Oklahoma cowboy raised in foster homes. Buck inherits an island and boat marina on mysterious Caddo Lake in east Texas from an unknown aunt. Once in Texas, he confronts racism, lost gold and the ghost of a girl that haunts the lake.


Five years later, Buck reemerges in Oklahoma when a wealthy rancher hires him to investigate murder, oil and cattle theft, and a group of mysterious women that live on a commune near the center of his large ranch. Buck soon learns the commune is populated by more than just a bunch of female crazies. They are doctors, scientists, architects and artists that have pooled their resources and have created a virtual Eden smack in the middle of central Logan County. The book is titled Morning Mist of Blood.

The women practice conservation, burning no fossil fuels. Their domal houses are partially buried, connected to shops, businesses and exotic restaurants by an elaborate system of tunnels. They also practice other things; they are members of the Southern Death Cult, an ancient Pre-Colombian religion. Their spiritual leader is Esme, a beautiful woman with a mysterious past, and a rattlesnake tattoo on her shoulder.

If you missed Buck, he is finally back. The paperback original will be out shortly but the Kindle Edition is already available on Amazon. Please check it out. I think you will like it.

Eric'sWeb
Posted by Eric Wilder at 11:30 AM No comments:

Big Billy was from Arkansas, but he loved to cook and to eat. He also cherished every part of Texas. He and Kathy, his significant other, did lots of land work in east Texas and liked visiting Caddo Lake. Here is a tasty regional side dish he picked up from one of the many catfish restaurants located in the area.

In east Texas, at restaurants on Caddo Lake, green tomato relish is served with hush puppies, French fries, cole slaw and catfish. Make a batch at the end of tomato season with your green tomatoes and serve it on a cold winter evening. Big Billy would guarantee that it will always bring a smile to your guest’s faces.
Ingredients

In a large soup pot, bring the sugar, salt and vinegar to a boil; then add vegetables; bring contents of the pot to a boil and continue for 2 minutes, timed. Remove to sterile canning jars. Process in hot water bath for ten minutes. Serve either chilled or at room temperature with fish.

Eric'sWeb
Posted by Eric Wilder at 10:59 AM No comments:

Eric'sWeb
Posted by Eric Wilder at 7:37 AM No comments:

Brightest Autumn Moon in More Than a Decade

http://www.mnn.com/food/organic-farming/stories/world-celebrates-autumnal-equinox-2010-brightest-in-over-a-decade
Eric'sWeb
Posted by Eric Wilder at 2:33 PM No comments:

And don't I know it. Owww, my aching arm!
http://www.guardian.co.uk/books/booksblog/2010/sep/17/rsi-real-pain-writing?utm_source=feedburner&utm_medium=feed&utm_campaign=Feed%3A+theguardian%2Fbooks%2Frss+%28Books%29

Eric'sWeb
Posted by Eric Wilder at 8:43 AM No comments:

Even More Summer of Bologna

Earlier this year I posted a story called Summer of Bologna, about my misadventures at geology summer field camp in Arkansas. As I read through the story again tonight, I remembered a couple of other things that happened to me that summer. Although funny now, they were not so funny then.

The man that taught the course, Dr. D, had brought along his wife and two children, and his two-year-old son Tommy was quite a handful. You may remember my mapping partner Roy. Our friendship went from good, to bad, to even worse before finally turning in the right direction. We were friends again by the end of our project and had borrowed the D’s tiny barbecue pit to grill a couple of steaks. It was the weekend; we had time off and a few extra bucks to purchase steaks, bakes and two six-packs of beer in a plastic cooler.

Dr. D had offered the use of his barbecue pit with the proviso that we would return it cleaner than we got it. No problem, we thought. That was before we began drinking beer and eating watermelon – yes we had also purchased a watermelon and had chilled it to perfection in the very chilly White River.

Our beer was half gone by the time we had eaten our steaks and started on the icy watermelon. It was about then that Dr. Ds son Tommy came running down the stairs. Feeling giddy, Roy spat a watermelon seed at him and it stuck on his bare chest. Maybe it doesn’t sound so funny now, but Roy and I had drunk just enough beer to think so. Between hysterical laughter, we both began spitting seeds at the kid.

At first, Tommy joined in the joke but soon realized that he was the butt of it. Covered with sticky watermelon seeds, he rushed back up the stairs, wailing like a banshee as he did. He soon returned with Dr. D. The Professor was not happy.

“Having a good time, boys?” he asked.

Dr. D’s question sent us both into a belly-rolling fit of laughter. Grabbing his tattle-tale kid by the hand, Dr. D did an angry about face and huffed away up the stairs. Too inebriated to clean the barbecue pit, we left it outside with the intention of cleaning it the next day. It rained that night, making a mess of the little stove. Tommy found it the next morning before Roy and I, getting soot and barbecue sauce all over his best Sunday church clothes.

Our good grades were already pretty much beyond hope. That is true, but one more incident occurred the last week of field camp that further sealed my fate. I had a cheap typewriter and I was using it to prepare my final report. It was so hot in the basement that I took the machine outside to a picnic table. After trying unsuccessfully to correctly seat the ribbon, I ripped it off the reel and threw it down the hill. Yes, you got it. Tommy found the ribbon. Covered with ink and wrapped in the inky tape, he was in a full-blown crying snit when he finally found his father.

Well, I passed the course anyway, albeit with a cee. Years later, I realize none of this story really matters.
Posted by Eric Wilder at 12:23 AM No comments:

Rain From the South 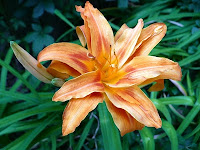 Tropical Storm Hermine whistled up from the Gulf of Mexico today, through Texas, bringing with it lots of rain and making me wonder why we still don’t have that flood insurance I promised Marilyn last spring I would buy. The August drought of 2010, along with its many hundred-plus degree days, is finally gone. We survived, albeit with some discomfort. Here is a pic of an Edmond, Oklahoma tiger lily that thrived through the worst of it.

Eric'sWeb
Posted by Eric Wilder at 10:14 PM No comments:

Lucky and Chuckie - a pic 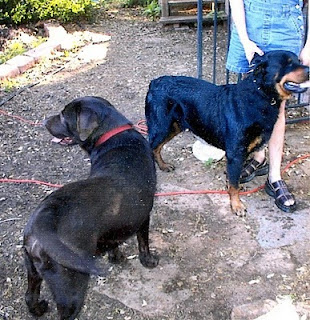 Here is a pic of Lucky (Lab) and Chuckie (Rott). It's hard to tell by this picture, but they didn't like each other very much and tangled on at least one occasion. Both were getting up in age at the time and no harm was done, except they were both out of breath.

Eric'sWeb
Posted by Eric Wilder at 10:25 PM No comments: