Hound of Christmas - a short story 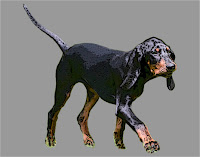 Not every angel has a halo. Some come with warm tongues and long floppy ears. 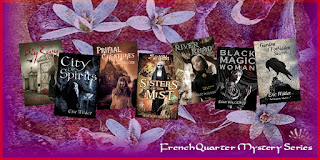 Born near Black Bayou in the little Louisiana town of Vivian, Eric Wilder grew up listening to his grandmother’s tales of politics, corruption, and ghosts that haunt the night. He now lives in Oklahoma where he continues to pen mysteries and short stories with a southern accent. He is the author of the French Quarter Mystery Series set in New Orleans and the Paranormal Cowboy Series. Please check it out on his Amazon, Barnes and Noble, Kobo and iBook author pages. You might also like to check out his website.

Posted by Eric Wilder at 4:46 PM No comments:

Blink of an Eye - an excerpt

Oklahoma didn't become a state until 1907. Before then, it was called Indian Territory and was a haven for outlaws, cutthroats, and renegades. A thousand years before statehood, Oklahoma was arguably the home of the most powerful tribe of Indians in either North of South America. The Mississippians were superb artisans as seen by the intricate artifacts of their culture.

The most powerful arm of the Mississippians lived near the eastern Oklahoma town of Spiro on a bluff overlooking an oxbow bend in the Arkansas River. They were called Mound Builders because they lived in dwellings perched atop large pyramid-like structures. The spiritual leader of Native Americans from two continents lived in the Mississippian settlement near Spiro, Oklahoma and the tribe hosted a Summer Solstice Ceremony every year for thousands of believers. An artifact found at many Mississippian archeological sites is a black pottery cup used in their tea ceremony. It's quite possible that the 'Black Cup of Oklahoma' is the most significant and spiritual relic remaining of the Mississippian culture.

Blink of an Eye is my latest mystery/thriller in the Paranormal Cowboy Series. In Chapter 1 my flawed cowboy detective Buck McDivit, a young man that can't mind his own business, rescues an old Indian from a fiery truck crash. The event launches him into a paranormal adventure in perhaps the wildest and remotest part of Oklahoma. What he finds there is all but unbelievable. If you like action, adventure, mystery, fantasy, and prehistory, please give it a read and see for yourself. I hope you love it.

Posted by Eric Wilder at 2:53 PM No comments:

Oklahoma is home to more American Indians than any state in the United States. Tribes were forcibly moved here when the country usurped their tribal lands. Many tribes were already in Oklahoma including the now extinct Mississippian Tribe that occupied much of the southeastern part of this country.
The Mississippians were mound builders and accomplished artisans as seen from the relics and artifacts gathered from their excavated ruins. 1000 years ago the Mississippian branch located near the town of Spiro Oklahoma was the spiritual hub of the Indian universe. Every year during the Summer Solstice thousands of Indians from all over both North and South America would congregate on a plateau overlooking a bend in the Arkansas River. Days of games, feasting, trade, and celebration would ensue. In my book Blink of an Eye, P.I. Buck McDivit travels back in time and witnesses this celebration.
The mighty chief of the Mississippians ruled the spiritual clan known as the Southern Death Cult. Today in Oklahoma many of the residents are descendants of American Indians. In Bones of Skeleton Creek, a pagan enclave celebrates Native American spiritual beliefs.
Many still believe in the "old ways" and still practice the tenets of American Indian mysticism. I learned as much years ago working as an independent geologist near Pond Creek. Hope you love reading Chicken Fries, a story about an occurrence that really happened to me. Welcome to Paranormal Oklahoma. ~ Eric

“Yes I do, little lady, and so may you. Ralph Thompson, the daylight driller on the rig that’s drilling your well is an elder in the Blackwell Coven.”

***
A near-full moon lighted the highway on our return trip to the drilling rig that night, the talk of pagans, cattle mutilations and possible human sacrifices resounding in our heads. The last two weeks of June had seen record rainfall and cool temperatures. That all had changed with the first week of July. The RV’s air-conditioner worked overtime as we pulled onto the location. It was after nine, the sky already dark as I parked the large vehicle and turned off the engine.
Sated by chicken fries and mashed potatoes, Ray and Anne prepared for some light reading, followed quickly by bedtime. I wasn’t so lucky. Leaving them to their idleness, I headed for the rig floor to retrieve my drilling samples. What I found was a moon-bright location and not a single roughneck in sight. Far across the wheat field, a coyote bayed at the moon.
The eighties drilling boom featured three things—fast money, prominent drugs, and rampant inexperience. The most experienced roughneck on the night crew had less than a year of oil field work under his belt. The rest, well. . .
My samples weren’t waiting for me at the usual place so I climbed the stairs to the drill floor in search of the driller. I found an empty doghouse and a fresh joint of pipe turning slowly. There was no one in sight. Above the pungent odor of burning diesel fuel, I smelled something wafting up from below: the unmistakable scent of pot. I started down the stairs toward the smell. Following my nose to the mud bin, I found two of the roughnecks. They were young, probably in their early twenties. From the look in their disjointed eyes, both were stoned.
“Did you fellows forget to catch my samples?”
The two young men answered me with nervous giggles. Realizing I wouldn’t get much more information from them, I walked around the drilling rig in search of the driller. A large rotary rig, powered by twin diesel engines is very noisy. Most oil patch workers have a significant hearing loss after years on the job. A drilling rig is also a very dangerous place to work and roughnecks with missing fingers is a common sight. Fingers aren’t the only things lost on a drilling rig. Those that aren’t careful often lose larger limbs and even their lives. High-pressure gas spewing uncontrollably from a broken wellhead had blown a man’s head off that year. I hadn’t witnessed the accident, but I knew the man’s father.
As I rounded the drilling rig, a heavy steel cheater bar tumbled off the rig floor, missing my head by inches and bouncing as it hit the ground. With my heart racing from a rush of adrenaline, I glanced up to get a glimpse of what or who was responsible. Seeing no one there, I raced up the steep steps to find the dog house and rig floor deserted. When I retraced my steps down the steep ramp, I found my missing samples had miraculously appeared, tied to the bottom rail in their normal place. Feeling I would get no satisfaction as to how the accident had occurred, I started back toward the RV. Waiting for me at the vehicle’s door was a large pentagram, painted in the sand with oil. On the front step was a headless chicken, its muscles still twitching.

“You have to make a sacrifice to appease the spirits,” Ralph had told us. “Otherwise the well will be dry.”
The sacrifice, according to Ralph, had to be something from the heart, something important to us.
That night, late, I walked out to the drilling rig. I had brought something from Sheriff Archie’s Café. It was a chicken-fried steak dinner, complete with baked potato and a double helping of cream gravy. I said a few words, left the offering beneath the drill floor and then returned to the RV. My meager sacrifice, probably fueled by my lack of belief, was all I could convince myself to muster.
When we logged the well, it looked great. Money in the bank, I thought! We sat production casing and began testing the wonderful-looking zones. I could tell you the well came on for a thousand barrels of oil per day. It didn’t. We tested every great looking zone in the hole. Finally, after scratching our heads, we plugged the well as a dry hole.
Drilling for oil is hard. Finding oil is harder. After many years of watching wells drilled into the earth, I have learned one thing, however, that particular thing escapes me at the moment. The well in Grant County should have been a monster discovery. Instead, it was an unexplainable dry hole. Well, maybe not completely unexplainable.
Anne and I returned to Oklahoma City after one last chicken fry and moved on with our lives and to other oil deals though I’ve often wondered about the Southern Death Cult well in Grant County. Should we have taken Ralph and Goldie more seriously? If the land we were drilling was really hallowed, I doubt any sacrifice would have sufficed. Later that summer, we visited them at their farm near Blackwell. Hey, but that’s another story waiting to be told

Born near Black Bayou in the little Louisiana town of Vivian, Eric Wilder grew up listening to his grandmother’s tales of politics, corruption, and ghosts that haunt the night. He now lives in Oklahoma where he continues to pen mysteries and short stories with a southern accent. He is the author of the French Quarter Mystery Series set in New Orleans and the Paranormal Cowboy Series. Please check it out on his Amazon, Barnes & Noble, and iBook author pages. You might also like to check out his website.

Posted by Eric Wilder at 4:54 PM No comments: