Storms of the Past

Several days have passed since the Christmas Eve Blizzard of 2009 but there is still ice and snow on the ground, another snowstorm predicted for later in the week. When I first moved to Oklahoma City, cold weather and snow was common. This year’s snowstorm is a rare occurrence and reminded me of some of the storms from my past.

After divorcing my first wife, it took a while before we sold our house. I wanted to move into an apartment complex called Woodlake that featured multiple swimming pools, tennis courts, both inside and out, racquetball courts, weight rooms and many, many singles. Not unexpectedly, it was full and there was a waiting list so I moved to another complex.

The apartments where I moved still exist. When I was there, the name was Chandalaque. I lived on the bottom floor of the two story complex and soon learned that it had little, if any insulation. Not only was it cold and drafty, you could almost hear a pin drop in the neighboring apartments. The winter that I lived at Chandalaque, snow covered the ground for what seemed like months. I remember because the complex sat off the road in an incline and I would have to help people get out of the icy parking lot every morning.

Chandalaque was across the street from Deaconess Hospital and many nurses lived there. My bedroom wall abutted the bedroom wall of one such nurse. She was blonde and pretty and had lots of male friends. At all hours of the day and night, her bedstead would begin banging against the wall, rocking my own bed, her moans of pleasure awakening me and usually preventing me from returning to sleep – at least quickly. I don’t know if she knew that I was an unwitting participant to her sexual activity and doubt that she cared even if she did.

Fresh out of my marriage, self esteem began slowly seeping back into my body. In the days of disco and before AIDS, easy sex and one-night-stands were common and I soon had female company of my own, giving the nurse a taste of her own medicine. I only lived at the complex for six months. I never met the nurse but she always frowned when we passed on the sidewalk.

No matter how deep the snow, it always melts when spring arrives. When my lease expired, I learned there was an apartment available at Woodlake. Renting a U-Haul truck, I backed up to my door and began loading, not worrying how I would extricate my couch and bed without help. Before I got that far, my close friend Mickey arrived. Maybe it was ESP because he knew I needed assistance and I had not called him – at least by phone.

Eric'sWeb
Posted by Eric Wilder at 11:06 AM No comments:

Growing up in northwest Louisiana in the fifties, money was scarce but chickens were cheap. One of the meals my mom prepared at least once a week was southern fried chicken served with fresh-cut fried potatoes. Although I never thought about it at the time, the meal now ranks as my favorite southern comfort food.

My brother Jack and I both liked the wishbone, the piece of the chicken we called the “pulley bone.” He was older and usually ended up with it. Whichever one of us got it we would have a contest, each grabbing an end of the vee-shaped bone and pulling. The one of us ending with the biggest piece of the pulley bone could then make a secret wish guaranteed to come true.

The recipe is simple, with only a few basic ingredients, and the preparation straight forward. Still, no one could fry chicken like my northwest Louisiana mama. If I had a pulley bone wish today, it would be for a bite of her fried chicken and potatoes.

Return the skillet to the heat and add milk, scraping pan to loosen any brown bits. Add chicken, skin side up. Reduce heat to medium-low, cover, and simmer until chicken is tender and juices run clear, about 15 to 20 minutes.

Marilyn and I visited Vivian, Louisiana in 2007 and took a few pictures around the Louisiana side of Caddo Lake. Caddo is like no place on earth, as you can see by these haunting pictures taken in late fall.

Posted by Eric Wilder at 3:32 PM No comments:

When corn is ground, the resultant fine powder is corn meal; the coarse remaining product is grits. I grew up eating either grits or fried potatoes for breakfast and I don’t recall my Mom cooking hash browns.

I recently ordered a birth certificate for my Dad and learned that his real father, a person that neither of us ever met, was from Maryland. Dad always liked sugar in his grits, a preference normally observed by people from north of the Mason-Dixon Line. Having a father from Maryland may explain this anomaly.

My second wife Anne, even though from Oklahoma, loved grits as much as I do. On a trip to Massachusetts to visit Cousin Angela, we stopped at a restaurant for breakfast and were happy to learn they served grits. When we ordered our side dishes, the young woman waiting on us got a big grin on her face.

“I’ll be right back,” she said. She returned with six other restaurant employees. “Say grits again, “she said. They all cracked up when we complied.

Yes, it’s a fact that the word grits has at least two syllables - if you are from the south, that is.

Here is a recipe for an Oklahoma version of the tasty North American polenta:

Eric'sWeb
Posted by Eric Wilder at 11:32 AM No comments:

My parents bought a new two-toned blue and white Chevrolet station wagon in 1959. It had a V8 engine but it wasn’t particularly fast, nor did it get very good gas mileage. Still, it was the car in which I learned to drive, had my first wreck in, and the place where I engaged in backseat sex for the first time.

The old Chevy was horribly unreliable. It had the habit of dying and then not starting again for thirty minutes to an hour. Funny thing, it never happened to anyone else but me. When I came home late, my parents would reprimand me for using car trouble as an excuse. It seemed I was in a no win situation.

This went on for about a year, the car dying on me unexpectedly at least a dozen times. It never happed to anyone else and it was apparent my parents considered me a bald-face liar. Whenever I told them about the car dying and then failing to start, they would just frown and shake their heads.

This all changed one day as my mom and dad were on their way to Shreveport. Dad always had a lead foot and couldn’t bear to follow behind a slower moving car. The road from Vivian to Shreveport is narrow, hilly and has many curves.

On a short straightaway, Dad yanked the Chevy into the passing lane and stomped the gas pedal. A car was approaching from the opposite direction but Dad’s passes were always close. This time, halfway around the car he was trying to pass, the engine died. With heart in throat, he braked hard, let the car he was trying to pass pull ahead, and then got off the road, narrowly averting a head-on collision.

My mom and dad sat on the side of the road for thirty minutes until the car finally started again. They stopped at the Chevy place on the way home and left it with the mechanics, the problem diagnosed and cured a few hours later.

Carbon instead of wire filled the spark plug wires. One of the carbon conduits had a crack in it. When it got hot, the spark would fail and the car would die. When the wire cooled, the car would start again.

“I’m happy to find out you haven’t been lying to us all this time,” my mother told me.

I had mixed feelings about Mom admitting that they may have been wrong about my honesty. I never thought of myself as the dishonest sort, but when your own mother doesn’t trust you – well, it makes you consider all your other possible faults.

As I think about the old Chevy, I miss it. It wasn’t a perfect car but it always got me where I wanted to go, eventually, and managed to teach me a few lessons about life and human nature along the way. Hey, it was the car I learned to drive in, had my first wreck in, and the place where I engaged in backseat sex for the first time.

Eric'sWeb
Posted by Eric Wilder at 10:11 AM No comments: 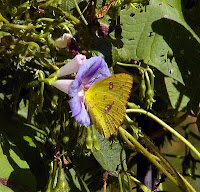 Here are two butterfly pictures, taken a few short months ago, to remind us, despite December's cold weather, that spring can't be too far away.