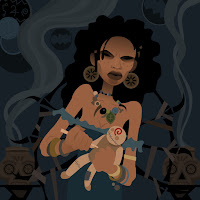 Mama Mulate is a recurring character in my series set in New Orleans and first appeared in Big Easy, French Quarter Mystery No. 1. Mama has a Ph.D. in English literature from the University of South Carolina where she was a star on their track team. She’s tall and slender with hair that flows over her shoulders and skin the color of café au lait. Mama teaches at Tulane University and has a dark secret she keeps from the administration: she is a practicing voodoo mambo.

Though attractive and highly intelligent, Mama is single, living alone in an old New Orleans’ neighborhood along with her three cats. The Conjure Man Zekiel also appears in my novel A Gathering of Diamonds set in the Ouachita Mountains of Arkansas. How can he live in two places? Well, perhaps by magic.
Mama has an eye for men, some of them, like Cray Toussaint, younger than she is. Cray is an interesting character: a young, black bartender who studied poetry at Tulane. Conjure Man is Cray’s only appearance in my series set in paranormal New Orleans. At least so far.
I hope you love Conjure Man and Mama Mulate. If so, I would be honored if you check out the other stories and books in my French Quarter Mystery Series. ~Eric~

Born near Black Bayou in the little Louisiana town of Vivian, Eric Wilder grew up listening to his grandmother’s tales of politics, corruption, and ghosts that haunt the night. He now lives in Oklahoma where he continues to pen mysteries and short stories with a southern accent. He is the author of the French Quarter Mystery Series set in New Orleans and the Paranormal Cowboy Series. Please check it out on his Amazon, Barnes & Noble, and iBook author pages. You might also like to check out his website.
Posted by Eric Wilder at 12:27 AM 1 comment:

Boil mirlitons in salty water until tender. Peel and cube the pulp. In a skillet, using butter, sauté green onions, onions, bell pepper, celery, and parsley. Add shrimp and cook 10 minutes. Add mirliton, garlic powder, salt, and pepper to taste, and then mix well. Pour into large casserole dish, sprinkle with breadcrumbs. In an oven preheated to 350 degrees, bake the ingredients 30 minutes, or until top is golden brown. Enjoy!