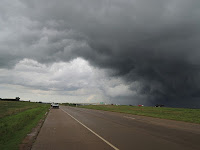 Rotating wall cloud just east of Guthrie, OK and I-35. Heading toward Langston and Cushing.

Except for occasional help from his on again, off again girlfriend Shirley, Bertram Picou relies mostly on himself to manage his French Quarter bar. Every now and then, he grows tired of tourists and locals, and shuts the doors for some R and R, usually cooking something just for himself. Sometimes, his friend Wyatt Thomas becomes the lucky recipient of his cooking prowess.
Bertram might lug his charcoal grill upstairs to Wyatt’s room, grilling on the balcony overlooking Chartres as they listen to the sounds of boats on the river, and cacophony on Bourbon Street. When Wyatt gets very lucky, Bertram, drinking shots of Cuervo as he cooks, will grill up his Andouille Fired Oysters, topping them with his spicy tomato sauce.
Here’s the recipe for Bertram’s own spicy tomato sauce. It’s a great sweet and sour sauce that goes perfectly with broiled and baked fish, and, oh yes, Andouille Fired Oysters. Stay tuned for Bertram’s Andouille Fired Oyster recipe. Meantime, here’s the recipe for his spicy tomato sauce.
Bertram’s Spicy Tomato Sauce
Ingredients
·         1 onion, thinly sliced
·         2 Tbs. butter
·         2 tomatoes, fresh, finely chopped
·         2 lemons, juiced
·         1 ½ Tbs. sugar
·         ½ tsp. mustard, dry
·         salt, to taste


Sauté onion in butter and then stir in tomatoes. Add lemon juice, salt, and mustard, and then simmer for a few minutes.
Check out more of Bertram and Wyatt in the French Quarter mysteries Big Easy, City of Spirits, and Primal Creatures.

Eric'sWeb
Posted by Eric Wilder at 12:37 AM No comments:

My heart goes out to all the people that suffered loss of family, friends and homes during the recent outbreak of killer storms in Oklahoma (and other states-I'm not forgetting you!) While Marilyn and I suffered no damage except for a few broken tree limbs, we know plenty of folks that did. You are all in my prayers.

Eric'sWeb
Posted by Eric Wilder at 7:27 PM No comments: 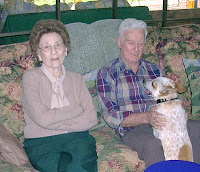 There’s a biker’s bar in Oklahoma City that’s also a restaurant and off-track betting facility. Marilyn and I like going there on Friday’s to eat Oklahoma comfort food (chicken fries, steak fingers, fried okra and cream gravy, etc.) and bet on the ponies. That’s where we were yesterday along with friends J.R. and Carol.


I’m not a great handicapper and almost always lose more than I win. I like wagering on names and lost six bucks in last week’s Kentucky Derby betting on Itsmyluckyday. It wasn’t! I think he finished sixth. Yesterday was no different. I was losing more than winning when the horses for the next race at Woodbine (we were watching races at several tracks so I’m not sure which one) showed the horses for the next race. The name of one of the horses was Mavis Road.

Mavis Road is a street in Ontario, Canada. Mavis was also my mother’s first name. One of the track pundits picked Mavis Road as a possible strong contender. It didn’t matter to me. Even with the odds at 22-1 that Mavis Road would win, I would have bet on the horse because it had the same name as my mother. Mavis Road didn’t win the race. It did come in second place and I won almost thirty bucks on a six dollar bet.

Do I believe my mom had anything to do with my success in the race? You bet I do. My mother, like almost everyone else’s on the face of the earth, was the single most important person in my life. Even from the grave I feel she’s still close by; always lending a helping hand. Thanks Mom, for reminding me you’re still with me, and HAPPY MOTHER’S DAY.

When cowboy gumshoe Buck McDivit is hired by a wealthy rancher to investigate murder, oil and cattle theft, he encounters more than he bargained for. His investigation leads him through places in Oklahoma City no tourist ever sees, and to a pagan commune populated only by women. Before he can solve the mystery, he must first survive a gang of cattle thieves, a killer tornado, and a shape-shifting black panther bent on his demise. A very untraditional Western. Hang on to your Stetson!