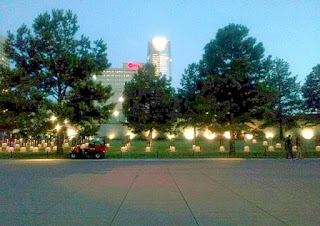 Here is a night pic of the Oklahoma City Bombing Memorial backdropped by the Devon Tower.

Here’s a recipe my mom used to make for my brother Jack and me. We both loved RC’s. Growing up without air-conditioning in hot and humid Louisiana, the cool custard hit the spot on a hot summer’s day. The recipe came from a cookbook she had called Favorite Recipes, compiled by the Pilot Club of Shreveport. Many of the recipes were attributed to someone. This one was not.

Of Moths and Men

My garage is partially connected to my utility room and stays cool in the summer and warm in the winter. My kitty Buttercup has a bed on top of my old Triumph TR4 and usually sleeps there every night. I have a lamp with a small wattage bulb that is always on.

Tonight, when I was giving Buttercup a kitty treat, I was greeted by what I at first thought was a large butterfly. It had gotten into the garage somehow and was fluttering around, desperately looking for a way out.

The creature was dark, and the more I looked at it, the more I began to think it was a bat. It was that large. Finally, it landed on a rafter and didn't move. I went into the kitchen, returning with a flashlight to see what I was dealing with.

The creature was neither butterfly nor bat. It was, in fact, a moth. A very large moth. I returned to the kitchen for a paper towel.

Very gingerly, I surrounded the moth and took it outside, unfolding the paper on the shrubbery, beneath a floodlight. It was then I saw the creature was even bigger than I had originally thought, with a wingspan of at least six inches. I kid you not! Shutting the garage door, I returned to the kitchen for my camera.

The moth was still on the paper towel when I returned with my camera but it gave me not even a second to point, focus and shoot. Fluttering off the paper towel, it passed in front of the floodlight, giving me one last glorious view, then fluttered away into the darkness and disappeared.

Even without my picture, I felt honored that I had witnessed such a large, beautiful and stately creature, and glad that I hadn't hurt it in my quest to rescue it from its captivity. I found a pic of an identical moth on the Web.

All of Eric's books are available at Amazon, Barnes & Noble, and on his iBook author pages, and his Website.
Posted by Eric Wilder at 11:13 PM No comments:

It's the July Summer sale going on at Smashwords.com.  All my ebooks are marked down at least half and many are free, including Lily's Little Cajun Cookbook, and Mama Mulate's Little Creole Cookbook. My books aren't the only bargains as many authors have also discounted theirs. Please check out my Smashwords homepage, and I hope you find many bargains. Eric

Eric'sWeb
Posted by Eric Wilder at 10:46 PM No comments: