The Robbing of Penn Square Bank

While it is true that the eighties oil bust adversely affected every oil hub in the United States, Oklahoma City maintains a unique position in the episode because it was the location of the infamous Penn Square Bank debacle.

Penn Square Bank occupied a stand-alone building in the parking lot of the Penn Square Mall, still located in the northwest corner of Pennsylvania Avenue and Northwest Expressway. The picture at the left was originally the Penn Square Bank Tower, symbolic of how much money the small bank generated in a short amount of time. During the go-go days of the last oil boom, officers of this bank began making oil and gas loans, then selling the paper to eager upstream banks like Continental Illinois. The problem was, many of these loans were secured by little more than a “lick and a promise.”

One story that has circulated for years now involves an oil company that borrowed millions of dollars to purchase drilling rigs. Auditors, attempting to account for the bank’s collateral after the company went bust, learned that Rig 13 (I don’t know if this is the actual number) was really a Lear Jet. Clients, supposedly with little or no oil experience, could get a million dollar loan with only a signature and the promise of drilling a few oil wells.

Many nouveau operators purchased jet planes, helicopters, luxury vehicles and lavish offices and lifestyles with the seed money they borrowed from Penn Square Bank and then parlayed into millions more with money raised from largely unsophisticated investors. It is safe to say that most of these investors had little more than a “lick or a promise” of ever seeing any return on their investment.

While drilling a well in western Oklahoma, one company encountered a large pocket of natural gas. The well blew out and the gas ignited in a huge burst of flame. Instead of worrying about the raging fire and its ensuing consequences, the company chartered a commercial jet and flew a planeload of investors and various company people to the blowout site. There they had tents erected, catered barbecue and beer, and a band to entertain everyone at an elaborate blowout party, ostensibly to raise even more money.

Elaborate parties were the norm during the last oil boom. Christmas parties hosted by operators and service companies boasted hundreds of guests, all enjoying free food, drink, and entertainment. I attended one oil company party where Mel Tillis and the Oakridge Boys were flown in by jet helicopter to entertain for an hour or so. One of the Penn Square loan officers was there, dressed in an Alpine costume complete with hat, shorts, and lederhosen. The party took place on a farm near Edmond, the cars and party-goers so thick that they blocked the adjacent county road for hours.

The eighties oil bust ended the careers of many would-be oil barons, including my own. Like so many others, my little oil company wound up on the busted scrap heap of broken dreams. Not much wiser but at least a little older, I became a fiction writer instead.

Posted by Eric Wilder at 7:43 PM No comments: 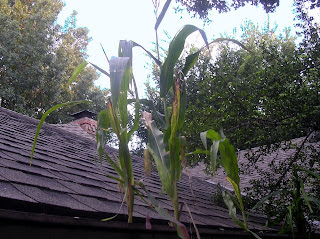 We are on the way to record yearly rainfall in much of Oklahoma. The most successive days without rain all year so far is seven, while we had one stretch of twenty straight days of rain. The grass is green and flowers blooming. Yesterday, I noticed that everything is so lush around my house that I have corn growing in my rain gutter. One ear is almost ready to eat.
The corn seeds got into the gutter from the multitude of birds in my backyard. Marilyn feeds them daily. Here is a pic of the corn growing in my gutter, in case you don’t believe me.

Posted by Eric Wilder at 7:31 AM No comments:

I was up late last night making final changes on a video titled Katrina’s Blues. The video is a slideshow of New Orleans, before, during and after Hurricane Katrina and features the poignant lyrics of Randy Newman’s Louisiana 1927. As if to herald the production, Oklahoma’s weather grew rainy as I turned off the last light and went to sleep.

Heavy rain continued throughout the night. This morning, two inches of water awaited me as I walked onto my sunken living room floor. The water had pooled up from six or seven inches of standing water in my sloping back yard, high enough to flood my living room. When I called a water damage-restoration company to help me, I learned that my insurance does not cover flood damage.

Unlike many of the residents of New Orleans, I didn’t suffer a complete loss, in my case probably only a few thousand dollars or so (yes, even a little water can do lots of damage). Still, it gives me pause to consider the harm done by hurricanes Katrina and Rita and what hardships the inhabitants of New Orleans endured and continue to endure almost a year and a half later.

Please check out my video on YouTube and say a prayer for the people of south Louisiana. While you’re at it, you might add a few words for all the people ravished by recent and continuing flooding in Texas, Oklahoma and Kansas, and many of the farmers that have lost all their crops this year.

http://www.youtube.com/watch?v=SnzY_Kmz0Uc
Posted by Eric Wilder at 10:23 AM No comments:

Moth on a Brick Wall 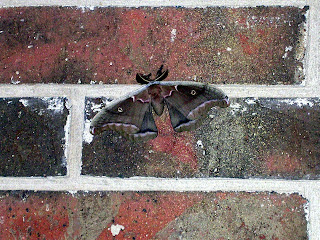 http://www.gondwanapress.com http://www.ericwilder.com
Posted by Eric Wilder at 9:31 AM No comments: