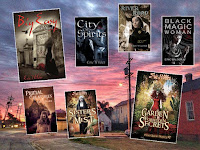 My new book is titled Garden of Forbidden Secrets. It's Book 7 of my French Quarter Mystery Series and is set in New Orleans. I always enjoy writing about New Orleans and this book is no exception. I’m also a huge basketball fan and enjoyed creating Taj Davis, my veteran NBAer, for this book. If you read my last book Sisters of the Mist then you’ll remember I left Eddie Toledo dangling in the breeze. I’ve resolved his dilemma in this book and I’m seriously thinking about spinning off Eddie into a new series. After you read Garden of Forbidden Desires I would love to hear your reactions and thoughts. The book isn’t yet available for pre-order on Amazon until December 1. Right now it's available in Nook, iBooks, Kobo, and Smashwords. Thanks for your support and I hope you love the book when it comes out on March 1, 2019.

Garden of Forbidden Secrets
A novel by
Eric Wilder

Though Taj Davis wasn’t oblivious to pain, he’d grown used to it during his seventeen years in the NBA. He hadn’t flinched when the hotel doctor deadened his foot before stitching up the wound. Used to boots and casts, the thick sock over his bandaged foot and the sandal he wore seemed mild to him.
Tommy had retrieved Taj’s bags for him from room 1313. After changing into a Cavaliers warm-up uniform, the tall basketball player had fallen asleep in a comfortable chair in the lobby of the old hotel. Tommy was still at work when Taj awoke the next morning.
“Management’s real sorry about what happened last night,” Tommy said. “We moved your bags to a room on the second floor.”
Tommy smiled and shook his head when Taj asked, “Are there ghosts on the second floor?”
“There’s ghost everywhere in the Big Easy but your new room is the safest one in the hotel,” he said.
“Why are you still at work?” Taj asked.
“Everyone in town loves the Pels and the hotel’s paying me overtime to stick around and get you settled. Ready to check it out?”
Taj grimaced when he got out of the chair and put weight on his foot.
“Dammit!” he said. “One day with the Pels and I’m already on the injured list.”
“Doc White said the cut wasn’t deep. You’ll be fine in a day or two.”
“No severed tendons or nerves?”
“Nope. Just a little soreness. Doc fitted you with a special padded sandal.”
Taj tested it with his weight. “You’re right. It’s a little sore though not bad.”
“You sure? The hotel has a wheelchair you can use.”
Tommy’s serious pronouncement brought a grin to Taj’s face.
“No wheelchair or crutches for me,” he said. “Not this year, anyway. I’ll be fine.”
Taj wasn’t so sure after following Tommy to the elevator. This time, the little bellman opened the door of his new hotel room with an electronic card instead of an antique key. When they entered, there was no smell of must or age. Everything was perfect, except for the view that didn’t hold a candle to the one he’d had the previous night.
Taj’s suitcase was waiting on the bed, his hanging clothes on a rack. He almost panicked when he realized he didn’t have his wallet. Tommy grinned and handed it to him.
“Lucky for you I’m not a thief,” the little man said. “Must be a couple thousand dollars in cash in there.”
“I’m not much for credit cards,” Taj said, handing him a twenty before tossing the wallet on the bed.
“With the money you fellas earn in the NBA, it must be nice.”
“I had a couple of big paydays. Now, I’m on a veteran’s minimum salary.”
“Still a million bucks, or more, I’ll bet,” Tommy said. “I’ll never make that much in my whole life.”
“Just dumb luck on my part,” Taj said. “Not everybody is six-nine.”
“It ain’t luck,” Tommy said. “Few big men can ball like you, You had to work at it to get as good as you are.”
Taj grabbed the wallet off the bed and handed Tommy another bill from it.
“You just earned yourself an extra twenty,” he said.
“Hey, thanks,” Tommy said. “If everything’s okay, then I’m on my way to the house for a little sack time. At least if my old lady don’t want to go dancing.”
Taj grinned at Tommy’s retort about his old lady. He stopped the little bellman with a question before he could get out the door.
“A question before you leave,” he said.
“Ask me,” Tommy said.
“I don’t have to report to the team until Monday. Where can I go to get some info about the tattoo on my chest, and the bloody voodoo doll I was carrying last night?”
“Some things are best left alone,” Tommy said. “What happened last night might be one of them.”
“Ain’t happening,” Taj said. “I need answers. Forgetting about what happened last night isn’t an option.”
“Your balls,” Tommy said with a grin. “Lots of voodoo shops, mostly tourist traps, in the Quarter. There’s one a few blocks from here on Dumaine. Someone there might be able to help you.”
You think the voodoo doll came from that shop?”
“You’re asking the wrong person,” Tommy said. “I don’t have a clue.”
“Sure about that?” Taj asked.
“They’s people that practice voodoo in Nawlins. I ain’t one of them.”
“What about the blood? Where did it come from?” Taj asked.
“From that cut on your foot,” Tommy said. “Where else could it have come from?”
“How did the damn doll get into my room, and why didn’t I know I was carrying it when you found me?”
“This is New Orleans,” Tommy said. “Live here as long as I have and you come to expect the unexpected.”
“Not the answer I’m looking for,” Taj said.
Tommy glanced at his watch. “Maybe someone at the voodoo shop can give you some answers. Me, I’m fresh out and tired as hell.”
“All right,” Taj said. “I know you’re anxious to get out of here. What’s the name of the place on Dumaine?”
“Dr. Voodoo’s Spells and Hexes,” Tommy said as he hurried out the door, not waiting for Taj’s next question.


“Her name is Mama Mulate.” 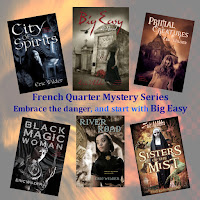 Born near Black Bayou in the little Louisiana town of Vivian, Eric Wilder grew up listening to his grandmother’s tales of politics, corruption, and ghosts that haunt the night. He now lives in Oklahoma where he continues to pen mysteries and short stories with a southern accent. He is the author of the French Quarter Mystery Series set in New Orleans and the Paranormal Cowboy Series. Please check it out on his Amazon, Barnes & Noble, Kobo and iBook author pages. You might also like to check out his website.
Posted by Eric Wilder at 12:55 PM No comments: