City of Spirits - an excerpt 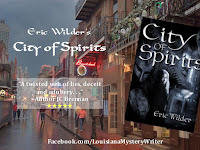 In City of Spirits my second book in the French Quarter Mystery Series, N.O.P.D. homicide detective Tony Nicosia is dealing with Mardi Gras, an escaped killer and an affair he's having with a woman young enough to be his daughter. When he seeks the assistance of his friend voodoo mambo Mama Mulate, she agrees to help him. First, though, he must help her with the problem that she has: the intervention of her friend who is a serial bird hoarder. 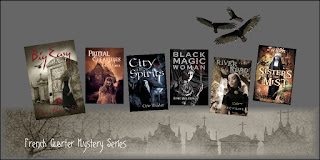 Born near Black Bayou in the little Louisiana town of Vivian, Eric Wilder grew up listening to his grandmother’s tales of politics, corruption, and ghosts that haunt the night. He now lives in Oklahoma where he continues to pen mysteries and short stories with a southern accent. He is the author of the French Quarter Mystery Series set in New Orleans and the Paranormal Cowboy Series. Please check it out on his Amazon, Barnes & Noble, Kobo and iBook author pages. You might also like to check out his website.
Posted by Eric Wilder at 12:16 PM