Halloween was my favorite holiday when I was young in .  No one had yet heard of predators preying on unsuspecting kids, so my parents, and everyone else’s parents would let us go trick-or-treating as soon as it got dark.  What’s more, no one expected us home anytime soon.


I couldn’t have been much more than five when I began staying out until the wee hours, dressed as a ghost or goblin, with my big brother Jack and close friend Wiley.  Most people quit answering their doors at ten but that didn’t keep us from knocking, or turning over their trash cans if no one answered and rewarded us with candy.


The only thing I can remember that was slightly unsavory was that someone gave us weevil bread – cornbread with boll weevils cooked into it.  We all decided that we had gotten the weevil bread from the mayor’s house.


I grew up in a different time, not better, just different, but I’ll never forget the feeling I had that I was somehow invisible, and that the darkness was where I was destined to be.
Eric'sWeb
Posted by Eric Wilder at 9:25 PM No comments:

My wife Marilyn was born in Oklahoma but spent much of her childhood in Gurdon, Arkansas. A railroad traverses the outskirts of the tiny Arkansas town and there are numerous accounts by people that have seen strange lights at night on the track. The house that Marilyn and her family lived in was near the tracks and an old black woman named Hattie worked for Marilyn's family. One dark night she recounted the story of the Gurdon Ghost to Marilyn and her sister Sharon. Is the story true? Sometimes the truth is stranger than fiction.

When I was young, I lived in the country just outside of . Our house sat alone, back in the woods, about a mile off the highway. Daddy was a logger. Mama took care of the house and all six of us kids. Hattie was a black woman who helped Mama with everything. She had her own house and family, but would often stay after work and visit with us on the front porch.

Eric Wilder is the author of the French Quarter Mystery Series and the Paranormal Cowboy Series. Please take a look at his Amazon, Barnes & Noble, and iBook author pages, and also his Website.
Posted by Eric Wilder at 9:11 PM No comments:

Check this out! Makes me want to be there.

NO_Halloween
Posted by Eric Wilder at 9:06 PM No comments: 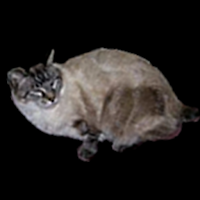 Cats are graceful creatures that never really have an owner, and I’ve told many stories about those that have occupied large places in my heart. One of them was a big Tom, a little special and just a bit more memorable than most.
All our acquaintances knew that Anne and I were cat people and rarely a week passed that someone didn’t try to give us one. We usually resisted, or else we would have had hundreds of cats instead of the handful for which we felt responsible. A cry for assistance occurred one day that we couldn’t ignore.
Friends of friends owned a small apartment complex, and someone had abandoned two cats in an upstairs apartment. A week had passed before the property owner found out and by this time the two felines were traumatized. Anne and good friend Bruce rescued them from the locked apartment after much ado and lots more trauma.
Both cats were solid white, one a young female, the older a grown male. Bruce fell in love with the little female and took her to care for. The big Tom was half-crazy from his stay in the apartment, and it was soon apparent that if Anne and I didn’t take him, we would have to have him put down.
We named him Max because there was a Mel Gibson movie out at the time called Mad Max and this new addition to our family qualified as more than a little wacky. Max was an American Bobtail/Siamese mix. He was white with slightly crossed blue eyes. He had only the semblance of a tail, and his hind legs were longer than the front ones. Even though fixed, Max had a heavily muscled torso and tufted ears that caused him to look like a white bobcat. Oh, and he was very strong.
For the first few days, we fed and watered Mad Max while giving him a wide berth. There were other cats in the family and soon he began to cozy up to us. He liked King Tut and followed him wherever he went. Tut was as regal as his name implied and I think he liked having a lieutenant around.
After a year or so, we noticed Mad Max was looking sick so we put him in the cat carrier and took him to Dr. Dugger, our friendly vet. He spent the day there, and when we picked him up, Dr. Dugger explained what had happened.
"Tailless cats tend to rub their rear ends in the grass and occasionally get plugged up. Max had an excretion ball that solidified to the point it wouldn’t pass. We gave him a sedative and then soaked his rear in warm water until we could extract it."
Dr. Dugger gave us some antibiotics for Max and the big boy was back to his normal self in a day or so. As time passed, he became an integral part of the family. He loved his daily full body strokes and began demanding his share of the attention. He was still sort of nuts, and if you rubbed him once too often, he would take a swipe at you with his powerful paw.
Another couple of years passed, along with the oil boom. Anne and I were struggling and had little money to go to the doctor or dentist, and the cats relegated to emergency only vet visits. One incident finally occurred that we had no money to let the vet remedy. Max had developed another petrified poop ball in his rear, and he was miserable by the time we noticed it.
"You’ll have to fix it, or he'll die," Anne said.
I knew she was correct. Drawing a bucket of very warm water, I pulled on a pair of gloves and prepared for the worst. I needn’t have worried. Powerful Max was too sick to fight. He didn’t even squirm when I lifted him and lowered his rear into the warm water.
I don’t know how long it took, but the petrified poop soon began to soften. I finally got hold of it with my gloved hand and worked on it until it finally came loose, Max and me both breathing huge sighs of relief as it did.
Max and I both survived the petrified poop ordeal, and he lived with us all together for almost ten years. He met his demise early one morning in a dramatic fashion. Anne was walking outside to get the morning paper when she heard a commotion in the garage. The cats liked to sleep there, roosted on the hoods of our car, and we always kept the door cracked so they could go in and out.
As Anne stood looking at the garage door, a large German shepherd came bounding out with Max in his mouth. Anne chased them down the street in her robe and nightgown, yelling at him to stop as she ran. The dog paid her no mind and quickly outdistanced her, disappearing down the block. We never found Max’s body.
Max was limp, his eyes closed when the large dog came running out of the garage with him. Our vet told us the dog probably killed him the moment he got him by the neck.
"He probably never knew what hit him and I’m sure he never suffered," Dr. Dugger told us, hoping to make us feel better.
Mad Max met his dramatic demise, hopefully without suffering. Anne and I consoled each other with the knowledge that he was a grown cat when we got him. He lived another ten very good years with people that cared for him deeply before the dog got him.
Yes, Max was a little different and slightly crazy, but we loved him despite his less than perfect qualities. He was a special cat, and sometimes you love special beings in ways hard to explain except in your heart.
#### 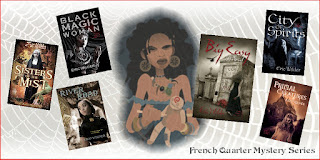 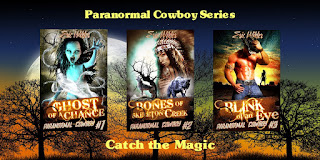 Born near Black Bayou in the little Louisiana town of Vivian, Eric Wilder grew up listening to his grandmother’s tales of politics, corruption, and ghosts that haunt the night. He now lives in Oklahoma where he continues to pen mysteries and short stories with a southern accent. He is the author of the French Quarter Mystery Series set in New Orleans and the Paranormal Cowboy Series. Please check it out on his Amazon, Barnes & Noble, and iBook author pages. You might also like to check out his website.
Posted by Eric Wilder at 8:41 PM No comments:

Louisiana is football crazy. People in New Orleans like the Saints and everyone in Louisiana like L.S.U. Bertram Picou is no exception. He’d like to tailgate along with all the other Louisiana football fanatics except he has no help at his eclectic French Quarter bar. When the Saints or the Bengal Tigers are playing, he’s always working. 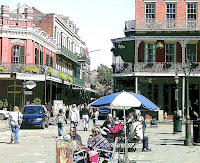 Through the years, he’s devised ways to keep his bar open while watching the big games and doing his own version of tailgating. He used to have a little TV set under the bar. Now, he has a big screen mounted on the wall and makes even more money than before from the lucky fans that wander in off the street. Lucky, you say? Bertram has an open grill in his tiny kitchen.


·         Oysters, large and fat
·         Bacon, thin strips
·         Butter
·         Parsley, minced
·         Lemons, sliced
·         Olives, sliced
Directions
Place a thin strip of bacon on a skewer, alternating with the oysters until the skewer is full. Broil over a medium flame. When the edges begin to ruffle, the oysters are ready. While you are doing this, prepare drawn butter by placing a cup near the flame so that it will melt. When it does, mix in the minced parsley.
Alternate the oysters and bacon on a hot plate and pour the drawn butter and parsley over them. Garnish with olives and lemon slices and you have the perfect, Louisiana tailgating snack, even if you are in a bar watching the game on a big screen TV.

Born near Black Bayou in the little Louisiana town of Vivian, Eric Wilder grew up listening to his grandmother’s tales of politics, corruption, and ghosts that haunt the night. He now lives in Oklahoma where he continues to pen mysteries and short stories with a southern accent. He is the author of the French Quarter Mystery Series set in New Orleans and the Paranormal Cowboy Series. Please check it out on his Amazon, Barnes & Noble, and iBook author pages. You might also like to check out his website.
Posted by Eric Wilder at 11:13 PM No comments:

Posted by Eric Wilder at 4:03 PM No comments: