How old is too old to fall in love? The question haunted me when I read a newspaper article in the Oklahoman about an old man that had disappeared from his son’s house during a late spring snowstorm.

The numerous casinos now prevalent all over Oklahoma weren’t in existence when I wrote this book. There was, however, Indian bingo. I drove through Red Rock, Oklahoma—site of a huge bingo gaming facility— the very day I read the article about the old man. It was springtime, flowers blooming and trees just beginning to bud. Like the flowers and trees, the story sprang forth in my mind, not letting me rest until I’d committed it to paper.

The Battle of the Bulge tale that John tells is true, at least as far as I know, recounted to me by my own father, a code clerk during World War II. Growing up, he was always my hero. His era produced many heroes, mostly unsung, their stories never told.

For awhile, I had the book posted on the website Authonomy.com, where authors critique each others' books and make suggestions for improving them. One author suggested I expand the book and resolve many of the questions left unanswered in the original version. Once I got started, the characters came alive again in my mind. When I finally stopped writing, the new version was almost fifteen thousand words longer than the original.

When is it too late to fall in love? Read John’s story, Prairie Sunset - of love and magic, now available across the web, and find out.

They say writers draw their stories from memorable personal experiences. If this is true, then I have lots more books I need to write. Here is a vignette from an episode in my life.

A storm is brewing outside my window as I pen this story, all my dogs seeking shelter, warned of the impending squall by rolling thunder and lightning flashes.

As a Vietnam vet, I had all manner of drugs available to me during my tour. I mostly passed, fearing being stoned during an attack. Some of my fellow troopers saw things differently, wanting to feel stoned rather than face a possible unpleasant situation without some sort of anesthetic. Years later, no longer worrying about physical death, I learned to anesthetize myself against the mental pain that had begun attacking the fortress of my soul because of a rapidly failing marriage.

Carol, my girlfriend at the time, became my drug guru, guiding me carefully down a path of knowledge and abuse. She was a gorgeous blond-haired woman with smoky blue eyes, heaving breasts and a sardonic smile. She chain-smoked and always had a cigarette in her hand, except when she was burning a joint.

On a night such as this, we attended a concert and laser light show at the fairgrounds of Oklahoma City. As a noisy thunderstorm raged outside, hundreds of drugged-out latter-day hippies raged inside, listening to psychedelic music while watching a colorful light show projected on the ceilings and walls. Like everyone else in the house, marijuana zonked Carol and I, the promoters of the event expecting as much. They didn't care, nor did the off-duty Oklahoma City cops acting as security guards.

The time was the late seventies, long past the sixties hippie era. Radio stations were playing disco, as the English musical invasion had mostly waned. You would not have known it that night as hundreds of stoners watched a light show performed to the songs of perhaps the greatest psychedelic band ever: Pink Floyd. The music and drugs caused me to recall a time from my not so distant past.

The last movie I saw as a civilian before becoming one with the military was Easy Rider. To say the movie affected me is an understatement. I rarely remember a movie for a week after seeing it, but almost forty years have passed since viewing Easy Rider and many of the scenes remain lodged in my mind.

What I remember most is the noir scene in the St. Louis #1 Cemetery where Wyatt and Billy take two whores they recently met and do drugs in perhaps the most surreal vista ever filmed in an American movie. Maybe I remembered this scene when penning Big Easy because hero Wyatt Thomas has a tryst with his own girlfriend at the St. Louis #1 Cemetery, the burial spot for famous New Orleans voodoo mambo Marie Laveau.

Carol and I watched the laser light show. Sated and satisfied we returned to her tiny house. Too stoned for lovemaking, we simply tried to sleep before Monday morning returned us to stark reality. Lying in the darkness of Carol’s bedroom, I stared at ceiling shadows, recalling the many bizarre events that had occurred in my life, and pondering what the next day might bring.

All of Eric's books are available at Amazon, Barnes & Noble, and on his iBook author pages, and his Website.
Posted by Eric Wilder at 12:48 AM No comments:

The mirliton is an aggressively-growing vegetable that thrives in south Louisiana, and dominates Mama’s backyard. An itinerant cheapskate, the voodoo mambo can’t stand to see a single plant go to waste, and compensates by creating many mirliton recipes. Here is one of her favorites.

Combine all ingredients, except flour, in a bowl. Add enough flour to make a thick batter. In a frying pan, heat oil until hot. Drop the batter, by spoonfuls, into the oil, and fry until browned. Turn once to brown on both sides. Remove fritters with a slotted spoon and drain on absorbent paper towels. Enjoy.

Eric'sWeb
Posted by Eric Wilder at 10:45 PM No comments:

Thought this might be of interest for everyone that loves animals and old Route 66.

And When I Die

War is a game I played when I was young. I didn’t know at the time, it was a reality that would steal my youth.

I was twenty three when I went to war. I didn’t get much time off during my stay at Fort Polk, learning how to kill, maybe two weekends. One of them I spent in Chalmette, visiting then wife Gail and her parents. I traveled there on the bus and the trip was memorable, not in what I saw, but in what I felt.

Leesville is the Louisiana town just outside of Fort Polk and one word describes it—seedy. The Leesville bus station fit the bill. I can’t remember how I got there, though I probably hitchhiked from the base. The lobby reeked with the vague odor of despair, the station empty except for the lady that issued my ticket without seeming to see me, and about a half dozen GI’s; like me, they were all privates.

I sat alone in the back of the bus, reveling in the legroom but saddened by the darkened loneliness. We were fifty miles out of town when one of the GI’s began to sing. I wasn’t very old. This kid was younger, probably no more than eighteen. There was a song out at the time called And When I Die. Laura Nyro wrote it and Blood, Sweat and Tears had a hit with the song. The young man had no accompaniment and sang it much slower even than Nyro’s version. His words tore the heart right out of my chest. The young man was an Eleven Bravo, same as me. We were both infantry bullet-stoppers bound for the human gristmill that was Vietnam.

Like me, he was probably afraid of death. I was afraid of something much worse—the decisive act of taking another human life. I didn’t know if I was up to the task, even though I’d had the act of ultimate enactment drummed into the very essence of my soul for the past four months.

The song’s lyrics ripped at my heart, though didn’t make me cry. I was drenched in the steel resolve of personal survival at the time. I would do what I had to do. I only hoped that any act of violence I might ultimately have to perform wouldn’t corrupt my soul—at least not forever.

Eric'sWeb
Posted by Eric Wilder at 11:42 PM No comments:


A few pics I took in my backyard the last day or so. The dogs, crows, and the spiders are loving the cooler weather.

The Man Behind the Naming of Route 66

Ever wonder how Route 66 got its name? Read this article and find out.

Eric'sWeb
Posted by Eric Wilder at 12:40 PM No comments:

A Change in the Weather 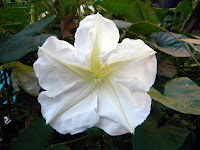 The weather is gorgeous here in Edmond since the cold front, and ensuing rainstorm moved out the heat dome. My moonflowers also appreciated the milder weather, blooming as never before tonight. Yes, they smell as wonderful as they look. 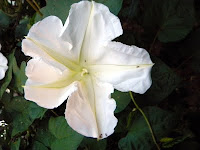 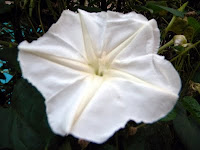 There are as many varieties of gumbo in New Orleans as there are streets with French names. One variety, Green Gumbo, or Gumbo Z’herbs, is little-known and generally found only in New Orleans. Catholic’s often serve this meatless gumbo (although meat may be added) on Good Friday. Superstition has it that a new friend will be made for every different green leafy vegetable used in the gumbo. Mama, a naturally suspicious person, always uses seven different types of greens. Here is her special recipe for Green Gumbo.

Wash the leaves thoroughly then remove coarse midribs. Pat dry. Put greens in a large pot with enough water to cover. Add black pepper. Boil for about 2 hours, strain and then chop very fine. Save the water in which they were boiled. Combine cooking oil and flour over medium heat in a heavy pot or Dutch oven.

When hot, add chopped onion and chopped sprig of parsley. Stir until roux reaches a rich peanut brown, and then add the chopped greens. When the leaves become brown, pour contents into the water in which the leaves were boiled. Throw in the bay leaf, thyme, sweet marjoram, red pepper pod, clove of garlic and allspice. Stir slowly. Place pot over low flame and simmer, partially covered for about 2 more hours, adding cayenne during the process. Serve with rice and French bread. Enjoy.

Buck McDivit, cowboy detective and protagonist of Eric Wilder's first novel Ghost of a Chance, returns in the mystery/thriller Morning Mist of Blood. Read it for free at Smashwords.

Eric'sWeb
Posted by Eric Wilder at 2:18 PM No comments: