I was an oil-finding geologist before becoming a writer. When my little oil company fell into bankruptcy at the end of the last oil boom, wife Anne and I traveled all over the United States looking for a bank to bail us out of the situation. We never found the bank we so desperately needed because, like the oil companies, they were also going out of business right and left.
During the 80's oil bust, there were so many houses foreclosed in Oklahoma City that the FDIC had to open an office there. Soon, they had a thousand employees working in the city. We weren’t the only Oklahoma oil company in trouble. They all were.
Our banking leads exhausted, we began looking for a "white knight" investor. Someone that could inject much-needed capital into our drilling program. Anne and I didn't know such a person, but we knew someone that did.
Norris Harris was born in Alligator, Mississippi and knew more people than the census bureau. He was also a brilliant, self-taught geophysicist and quite the oil promoter in his own right. He was the real owner of Clayton Farlow's ranch in the TV series Dallas. A fiction writer with the world’s greatest imagination could never create a fictional character as interesting as Norris. If I were inclined to write a biography, it would be his. Norris knew a possible “white knight” in New Orleans, so we headed south to make our pitch.
He booked us at the Monteleone Hotel, a wonderful place on Royal a block from Bourbon Street. A charming ladies man, he'd invited his new girlfriend along as his latest marriage was already in the dumpster. Norris wasn't good with relationships. Next day, we took a taxi down Bourbon Street.
Mr. X (a very real person) lived in a million dollar shotgun house on the end of Bourbon Street. A shotgun house, built in the 1700's, is so named because if you unloaded a shotgun at the front door, the load would exit the back door without striking a wall. There isn’t much to a shotgun house. Because of their location, they’re worth millions of dollars; yes, even after Katrina.
Norris introduced us to Mr. X a friendly man with dark Cajun hair and eyes, and a long black mustache. He had a manservant he called Hay-sus. Hay-sus couldn't speak English but knew how to mix drinks. Mr. X started talking, and we listened and drank, all day long. A one-time banker friend (surprise, surprise!) had apparently ruined Mr. X. Now, they were bitter enemies.
He told us he'd built the first skyscraper in New Orleans after devising a way to drive pilings to keep the building from collapsing because of the city's unstable earth. He also told us of a location on the north side of Lake Pontchartrain where he'd discovered fresh water in a deep well. His old enemy had once again torpedoed plans to pipeline it to New Orleans, a city that gets its water from the Mississippi River. Those were but a couple of tales he told us during our visit. I was drinking whiskey, and Hay-sus kept my glass filled. After a while, I almost forgot why we were there. Didn't matter because we never got the chance to plead our case.
It was well after dark when Hay-sus and Mr. X returned us to the Monteleone for dinner. Because he was allergic to seafood and didn't like steak, we ate at the hotel's Mexican restaurant. We dined on enchiladas while a troupe of Mexican singers he was paying a hundred dollars a song, serenaded us.
Norris's girlfriend had left some time before he made it back to the room (as I said, he was hell on relationships) so the three of us met at the Monteleone’s Carousel Bar the next day for drinks before flying back to OKC. I got so drunk and disoriented that I could hardly walk out the door.
Anne and I never found a “white knight." Our company’s bankruptcy stood leaving our hopes and dreams struck down like so many tin soldiers. Much later, Mr. X became the prototype for my character Gordon Vallee in City of Spirits Book No. 2 in my French Quarter Mystery Series. Like our oil company, neither Norris nor Anne survived the oil bust. They both passed away, leaving me alone with a soggy brain filled with blurry and bittersweet memories. 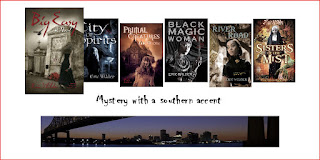 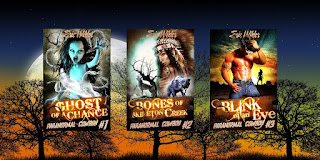 Born a mile or so from Black Bayou in the little Louisiana town of Vivian, Eric Wilder grew up listening to his grandmother’s tales of politics, corruption, and ghosts that haunt the night. He now lives in Oklahoma and continues to pen mysteries and short stories with a southern accent. If you liked this story, please check out his Amazon, Barnes & Noble, and iBook author pages.
Posted by Eric Wilder at 9:03 PM No comments: