I just saw the news on the Internet today that the great Richie Havens has died. Havens was the opening act at Woodstock and performed the song Freedom. I didn’t make it to Woodstock in August of 1969. As a very young geologist, I was busy drilling a dry hole in east Texas, not far from where my great-grandfather had died. A month later, I married my first wife Gail. Six months later, I was training at Fort Polk’s Tiger land. Nine months later, I was a line company grunt, infantry machine gunner, with the 1st Cav in Vietnam.


My first marriage didn’t work out. Neither did the results of the Vietnam War. Richie Havens didn’t change the world, but his songs brought hope to all the twenty-somethings like me back then. Now, Richie’s dead, and I just keep pushing on, listening to Freedom in my head, wishing war would soon be gone, but knowing freedom’s just a word, an empty word in an unfinished song.

Eric'sWeb
Posted by Eric Wilder at 9:41 PM No comments:

Marilyn and I had dinner at Pepe’s, our favorite Mexican restaurant in Edmond, tonight. In business since the seventies, gray-haired Pepe is always at the front door, greeting his incoming guests. Pepe has an old—twenty years old, at least—big screen TV in the bar area where Marilyn and I usually eat. Pepe is a newshound, the TV usually on the local or national news. Tonight, as we ate fajitas and quesadillas, we watched the unfolding story of the second Boston Marathon bomber’s capture in Watertown, Massachusetts.

After an all-day lockdown, the citizens of Watertown had poured out to the streets, cheering, yelling, and clapping their hands in admiration as police cars—marked and unmarked—fire trucks and ambulances drove slowly out of the area. The smiles, cheering, and applause continued through the entire meal. They probably continue to cheer in Watertown, Boston, and the entire state of Massachusetts. I felt like cheering myself.

It dawned on me that today is April 19, 2013, the 18th anniversary of another horrible act of terrorism—the Oklahoma City Bombing. The citizens of Oklahoma City were not cheering eighteen years ago on this day, but like the good people of Boston they somehow got through all the carnage and suffering, shaken but not defeated by a cowardly act of terrorism. The faces in the crowd tonight on Pepe’s big screen TV reminded me what a melting pot Boston is. Republicans, Democrats, Independents, Christians, Jews, Muslims, pagans, blacks, whites, reds, yellows, maybe even greens. It did not matter. Everyone was standing shoulder-to-shoulder, everyone applauding, and everyone smiling.

It struck me that what is so powerful and compelling about this country is that we’re a family. A tribe formed by blood and sweat, working, fighting, and often dying for the common good. We hardly ever agree on anything, but when it comes to helping and protecting each other, we stand like those good folks in Watertown, Massachusetts tonight. Together, arm-in-arm, shoulder-to-shoulder.

Awakened twice during the night by the wall shaking. The window by my bed recoiled so hard, I thought it was going to explode. Still half asleep, I first wondered if it was an intruder trying to break into the house before deciding it must have been a violent gust of straight line wind. Strange, because the wind wasn't blowing. What next? Hurricane's in Kansas?

Eric'sWeb
Posted by Eric Wilder at 7:05 AM No comments:

You Can Buy Almost Anything on Amazon 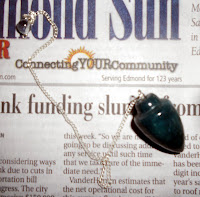 You can buy almost anything on Amazon! While doing research for my new French Quarter mystery, Black Magic Woman, I came across an article about pendulums. Among many other things, they apparently are sometimes used by diviners to channel spirits. After searching for pendulums on Amazon, I was surprised there were many for sale. I ordered a bloodstone pendulum. The one that arrived was actually tipped with a green stone (jadeite ?) and not bloodstone. No problem! I love it anyway. Next full moon, watch out!

Spring is in the Air

The past week's rain is gone, replaced by hazy sunshine. Though I'm trying to work on my new book Black Magic Woman - Wyatt Thomas travels back in time to solve a age-old mystery with the help of voodoo queen Marie Laveau - the beautiful weather keeps beckoning me outside. Trying not to succumb, but ...

Eric'sWeb
Posted by Eric Wilder at 1:31 PM No comments:

It's a gloomy day in Oklahoma, Edmond in the eye of a large, regional storm system. The local weather jocks predict we could get as much as three inches of rain. Hope so! Oklahoma is still in the midst of a drought that's going on four years now. It's raining, but Oklahoma is still burning. Oh, travel over to Amazon, Barnes & Noble, or Apple IBooks and download a free copy of Big Easy.

Eric'sWeb
Posted by Eric Wilder at 11:50 AM No comments: